It’s been one year since the passing of writer-director Paul Mazursky, one of the cinema’s funniest and most perceptive chroniclers of American middle-class life. Celluloid Dreams honors his legacy with this special 35mm presentation of his 1978 smash hit comedy, followed by a discussion on his life and work.

“She laughs, she cries, she feels angry, she feels lonely, she feels guilty, she makes breakfast, she makes love, she makes do, she is strong, she is weak, she is brave, she is scared, she is… an unmarried woman.” Named by Andrew Sarris the number-one movie of 1978 (“the best American film I have seen in several years”), Mazursky’s sixth feature follows Erica Benton (Jill Clayburgh, in every scene and never better) a seemingly happy Upper East Side wife and mother blindsided when her husband (Michael Murphy, in a trial run for his Yale character in Manhattan one year later) abruptly announces he’s leaving to be with a younger woman. Erica struggles with her newfound singlehood — her life becoming “part Mary Hartman, part Ingmar Bergman,” as she tells her shrink — until she finds a new lover in a rugged downtown painter (British actor Alan Bates, in his first American role)… but maybe he isn’t what she needs, either. Full of the sharp dialogue and biting characterization for which Mazursky had become known, AN UNMARRIED WOMAN introduced a new level of honesty and naturalism to his work and became a cultural sensation, netting Oscar nominations for Best Picture, Best Actress, and Best Screenplay and igniting conversations about feminism in American cinema. Despite its acclaim upon release, this incisive character comedy (and great New York movie) remains underrated today (and inexplicably out of print on DVD), so we’re thrilled to present this special screening in honor of Mazursky’s indelible achievement.

Part of the series Celluloid Dreams 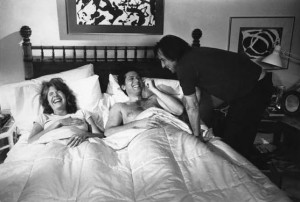 One of the funniest, truest, sometimes most heartbreaking movies I’ve ever seen.