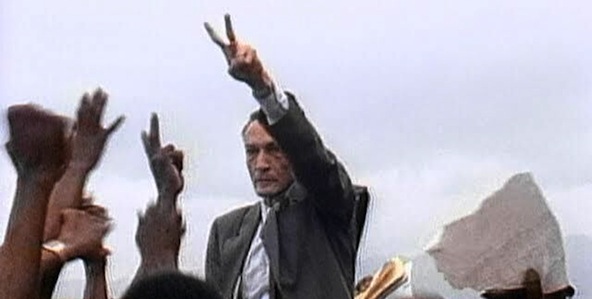 STF’s Fall Season is dedicated to a retrospective of Jonathan Demme’s documentaries. Demme will present his film about the Haitian radio journalist Jean Dominique. Demme talked about the film on Pure Nonfiction episode 6. Here is an excerpt of A.O. Scott’s 2004 review in The New York Times:

In recent months, between grim bulletins from the Middle East, Haiti has periodically found its way back into the headlines. As has so often been the case over the last 30 years, the news has been confusing, dispiriting and sad. The turbulence that led to the removal of Jean-Bertrand Aristide from Haiti’s presidency gives ”The Agronomist,” a superb new documentary by Jonathan Demme, a melancholy timeliness. Its hero, Jean Dominique, embodies the fragile, perpetual hope that Haiti, so long tormented by foreign meddlers and domestic dictators, might someday nurture a just and decent political order.

The film…emphasizes both the fragility and the resilience of that hope. The resilience is personified by both Dominique, an excitable, elfin figure who looks a little like Joel Grey, and his wife, MichÃ¨le Montas, who, while calmer than her husband, is no less strong and determined. Mr. Demme’s interviews with them are interspersed with the voices of family members and colleagues and television news clips, all bound together by Wyclef Jean and Jerry Wonda Duplessis’s simmering, loose-limbed score.

The music bubbles up under the interviews, an unusual tactic in a politically minded documentary, but an apt one here. Dominique was a radio personality; his voice was frequently broadcast on Radio Haiti Inter, the independent station he ran from the 1960’s until his assassination in 2000. But his political commitment also expressed itself with the same buoyant, infectious joy that percolates in Mr. Jean’s melodies. As he surveys the vicissitudes of repression in his native country — frequently from exile in the United States — Dominique is funny and acerbic, immune both to wishful thinking and to despair.