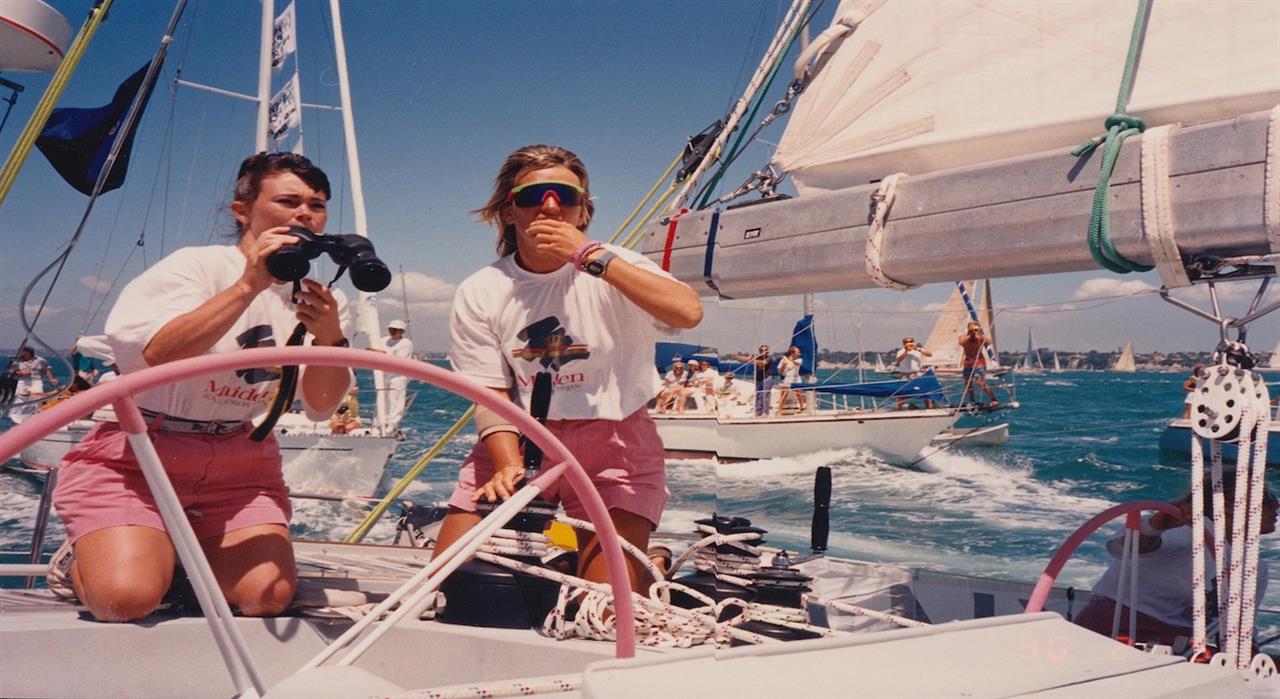 In 1989, the very idea of a competitive all-female sailboat crew was nearly inconceivable to the manly world of open-ocean yacht racing. They’d never make it to the start of the Whitbread Round the World Race, much less survive to the finish. They’d never find funding. They didn’t have the strength or skill. They’d die at sea. Did that many professional female sailors even exist? Tracy Edwards proved them wrong. 26-year-old skipper Edwards, her second-hand racing yacht Maiden, and her seasoned crew not only became the first-ever all-woman challenge to the Whitbread, they proved able competitors in the famously grueling race, besting male crews in their class. By the time they returned to their starting point at Southampton, England after 32,000 miles of global racing, they had shocked, inspired, and transfixed the sailing world and the British nation. Tracy Edwards was awarded the 1990 Yachtsman of the Year Award, the first woman ever to receive the accolade, and was named a Member of the Order of the British Empire. Maiden’s story does not begin in such glory. Unlike most of her Maiden crewmates, Edwards did not grow up in a sailing family. After her beloved father died when she was 10, conflict at home with an antagonistic, alcoholic stepfather drove Tracy to anger and rebellion. Although her supportive and adventurous mother stood by her always, Tracy dropped out of school and ran away at 16, finding refuge around island resorts among the hard-partying tribe of boat crew gypsies, working as a cook and stewardess. Sailing represented freedom—and she then set her sights on experiencing the world’s biggest sailing event, the Whitbread Round the World Race that circumnavigated the globe every three years (known since 2001 as the Volvo Ocean Race). In 1985 she managed—barely—to find a berth as a cook on a British boat in the 4th Whitbread Race, observing and absorbing as much as she could about racing “when they’d let me up on deck.” After that exciting taste of the sport—along with the bitter taste of the sport’s pervasive sexism—Edwards became determined to skipper her own boat in the 5th Whitbread, in 1989- 90. The obstacles were daunting. Racing requires massive financial support, and corporate sponsors were leery of attaching their names to a novel and potentially disastrous effort led by an untried girl in her twenties. When the yachting press paid attention at all, it was to treat Edwards and her campaign as an amusing curiosity. She didn’t even have her own boat till she found an old racing yacht, beat-up but still sound. Edwards put everything on the line, mortgaging her house to pay for the 58-foot aluminum monohull previously named Disque D’Or and later Prestige, a veteran of two earlier Whitbread races that had performed well. She had been designed to be relatively easily handled on long ocean passages—but when Edwards bought her, she was in disrepair, “a wreck with a pedigree” as Edwards called her. Edwards may have lacked funds, but what she did have in strength was a knack for finding and inspiring talent. Highly skilled professional women sailors did indeed exist, and they signed on to fight alongside Edwards for recognition, opportunity, and passion for their sport. One of the first to join was Tracy’s girlhood best friend, confidante, and moral support Joanna Gooding, who came aboard as cook (and behind-the-scenes videographer). Many of the crew members had far more sailing knowledge and experience than Edwards herself, but her relentless determination made her a leader, even when she battled exhaustion and self-doubt. To get to the Whitbread start line in the first place, the crew rolled up their sleeves to painstakingly tear down and refurbish Maiden in the venerable Hamble shipyard, a traditionally male bastion. By carrying out the refurb themselves, the crew knew every cable, bolt, and latch on the boat—which proved life-saving when they were able to diagnose and repair a leak at sea off Cape Horn. Edwards and crew adapted the boat to compensate for the lesser physical strength of a female crew but to benefit their talents; for example, the foresails were smaller than those on their competitors’ male-crewed yachts because they require frequent changing. Because the Maiden crew could muscle their way quickly through resetting foresails, they could use sail changes strategically. Maidenn wore the colors of Royal Jordanian Airlines, the sponsor Tracy finally secured through the patronage of Jordan’s King Hussein. The story of Maiden’s upstart, defiant run at the Whitbread Round the World Race has all the elements of an epic adventure tale—50-foot waves, life and death drama, near-mutiny, thrilling victory—grounded in a perceptive group portrait of a team of courageous young women led by the remarkable, complicated Tracy Edwards. They pioneered the sport of long-distance racing for the women who followed and inspired women in all fields to prove themselves the equal of men.