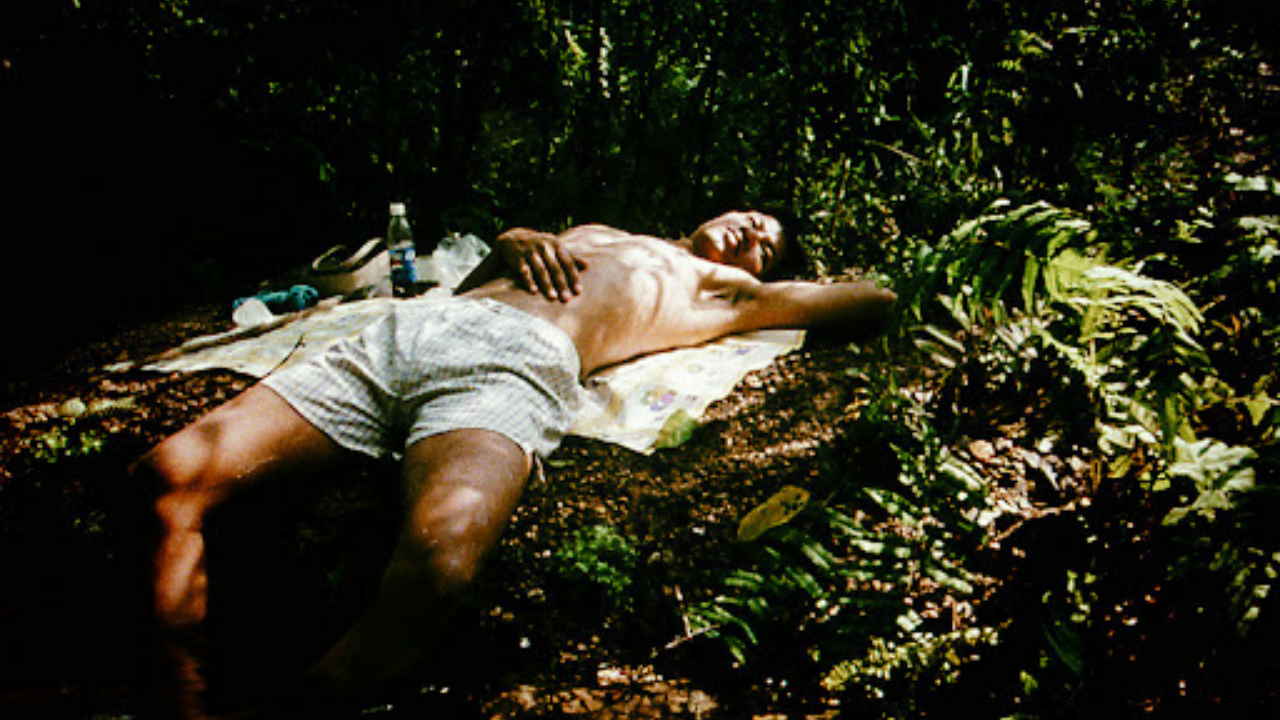 “In Blissfully Yours, a delicate, ethereal dream of a film from the young Thai director Apichatpong Weerasethakul, two women and a man voyage into the wild, away from civilization and its discontents. Under a lush canopy of green, the travelers settle onto the bank of a small river for a modest picnic and some languid sex, cooling themselves in the lucent water and plunging into a parallel stream of tears. In this film, which opens today in Manhattan and marks the emergence of one of the more original and promising new voices to hit the international cinema scene in recent years, the primordial world offers only modest respite from everyday troubles.

The film begins with the two women, Roong (Kanokporn Tongaram) and Orn (Jenjira Jansuda), hovering next to the man, Min (Min Oo), in a doctor’s examination room. Suffering from a rash that has covered his body in painful lesions, Min remains silent throughout the exam while the women speak on his behalf. We don’t know yet that he’s a Burmese migrant worker or perhaps in exile and is probably in Thailand illegally. What we do know is that the women are trying to get a work permit for him, but the doctor won’t cooperate. Shot in the actual offices run by the filmmaker’s doctor parents in the northeastern Thai city Khon Kaen, this opening exchange has a naturalistic awkwardness, with the actors crowding the frame with a palpable, almost comic sense of collective unease.

That unease gently dissipates as the story unfolds and the three main characters make their way into the forest. Because Mr. Weerasethakul isn’t interested in conventional narrative, however, the story doesn’t unfold in a linear, three-act fashion; rather, it leisurely zigs and zags, first to the factory where Roong painstakingly hand-paints Disney figurines until her hands ache, then to the office where Orn’s husband works.

Although he pokes about the edges with a sharp, almost ethnographic eye, Mr. Weerasethakul doesn’t linger in any of these places. We’re there just long enough to catch a glimpse of normal everyday Thai life, as if the filmmaker wanted us to see these chilly institutions so that we can fully appreciate or at least intuit (Mr. Weerasethakul doesn’t like to overstate his intentions) the importance of the coming idyll.

For Min, Roong and Orn, the trip into the forest will be no simple day in the country; it is something more urgent and necessary. What it means to each character emerges slowly through fragments of conversation rather than through speeches and scripted epiphanies. You don’t need to know the political backdrop to understand or enjoy “Blissfully Yours” — the film’s aesthetic pleasures are generous — but a sense of the larger context enriches the overall experience.

There’s a suggestion that Roong is a member of the Karen ethnic group, a hill tribe people who live in northern Thailand and eastern Burma and have been involved in human-rights struggles with both countries. Like Min, whose skin rash probably developed after he hid from the police in a septic tank, she enters the forest like a refugee.

When the three characters finally find their way into the forest, a journey punctuated by an unexpectedly funny joke pegged to the film’s credits and a plaintive encounter between Orn and a male acquaintance, the mood and the look shift into a different register. There, in a forest as thick with mystery as a painting by Henri Rousseau, Mr. Weerasethakul lets loose beauty with a vengeance.

As the filmmaker freely indulges in the forest’s voluptuousness and his own feel for composition, his characters — freed from work, the city and everyday life — shed their clothes and tentatively bump against one another with both pleasure and frustration. In this secret place, where even the smallest gesture becomes an epic of emotion, these three people finally find a moment of quiet by letting the earth swallow them whole.” – Manohla Dargis, New York Times