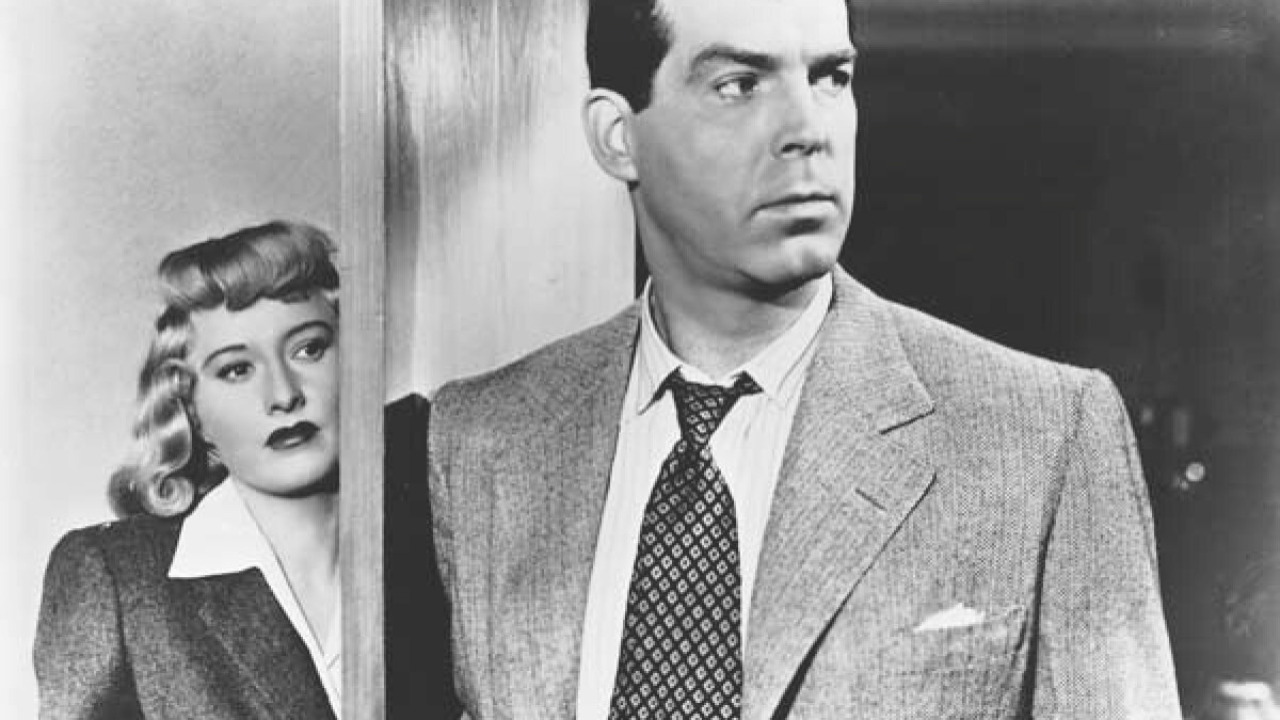 “Six years before a Hollywood screenwriter’s corpse narrated Sunset Blvd., a dead-man-walking delivered the hard-boiled voiceover in another Billy Wilder inquiry into moral rot in sunny California. Walter Neff (Fred MacMurray), a salesman for Pacific All-Risk Insurance, staggers into the office late one night to record a memorandum regarding the recent death of a policyholder: ‘I killed Dietrichson… for money, and a woman. I didn’t get the money, and I didn’t get the woman.’

“There’s nothing but a towel and a staircase between Neff and the woman when they first meet; Neff pays a house call on Dietrichson’s Spanish-revival pile in LA, where old dust levitates in the bands of light through the Venetian blinds, and he encounters the oil executive’s bored, platinum-blonde second wife, Phyllis (Barbara Stanwyck). She’d like to know if she can secretly procure a life insurance policy for her spouse; Neff knows she’s conscripting him for her husband-disposal unit, and he knows that claims manager Barton Keyes (Edward G Robinson) will smell a putrefying rat, but they’ve got power-surge chemistry, and that’s a honey of an anklet she’s wearing…

“As poised and languorous as a cat, Stanwyck’s definitive femme fatale could be one of the savvy minxes of the actress’ delectable Pre-Code years – the jailhouse alpha female in Ladies They Talk About, the secretary trampolining up the office ranks one bed at a time in Baby Face – grown older and harder, her manicured ruthlessness calcifying into brutal amorality. With diamond-hard repartee by Wilder and Raymond Chandler (by way of James M Cain’s novel) and ghoulish cinematography by the great John Seitz, this is the gold standard of ’40s noir, straight down the line.” – Time Out (London)”