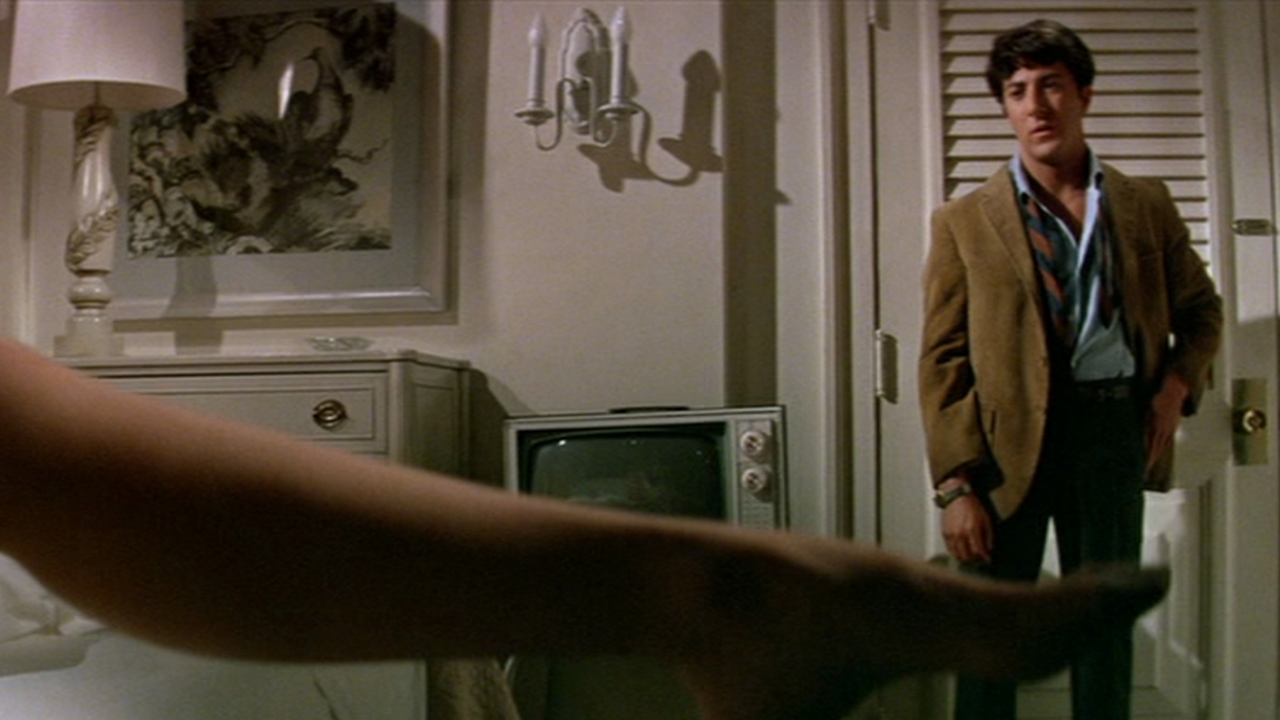 “Released in late 1967, when the counterculture was in full swing, Mike Nichols’ second feature THE GRADUATE sank its barbed wit deep into the zeitgeist, becoming one of the biggest commercial hits of all time. Adapted from Charles Webb’s comic novel by Calder Willingham and Buck Henry—with a mighty assist from Nichols, a visually gifted theater director-turned-filmmaker who wanted to communicate through images—it told the discomforting story of Ben Braddock (Dustin Hoffman), a former track star who comes home for the summer after graduation and falls into despair. The exact sources of Ben’s discontent are never spelled out—neither Ben nor his relatives or neighbors are much for introspection, much less philosophizing—but it’s clear from the way Nichols presents his gloomy withdrawal that American life bears much of the blame. The crass flaunting of real estate, clothes, automobiles, and consumer goods (including the scuba gear Ben’s dad buys him as a graduation present and forces him to try on for guests) fills up the space where empathy and connection ought to reside. Every time Ben turns around, somebody’s asking him if he’s thought about his future and giving him bland, unhelpful suggestions (“plastics”). The unspoken assumption is that Ben’s going to follow in the footsteps of his parents, and maybe the only thing he knows for sure is that he’s sure to succumb to that fate unless he starts taking some risks.

Ben’s stopgap solution, alas, is to embark on a shameful and thrilling affair with Mrs. Robinson (Anne Bancroft), mother of Elaine Robinson (Katherine Ross), a college-bound high school senior that Ben somewhat fancies. Brilliantly written and acted, Mrs. Robinson is equal parts film noir seductress and hard-boiled screwball dame, smirking and leering through a haze of cigarette smoke—seemingly the only person in the movie who can stand outside of herself and take stock in what she’s become. She ensnares the eager Ben partly out of boredom and partly, it seems, to divert him from latching onto her daughter. Mrs. Robinson, too, fears history repeating itself, but her obsession is more self-flagellating. A sarcastic, sexy art history major who once dreamed of a more exciting life, Mrs. Robinson numbs her present-tense malaise with booze, sex, and fashionable nihilism. Nichols and cinematographer Robert Surtees capture the affair, its aftermath, and the jolting midpoint entrance of Elaine in a series of impeccably composed, dynamically fluid Panavision images that turn wealthy white Vietnam-era Los Angeles into a white collar prison whose denizens have no idea how limited they are. It’s like the zoo that Ben and Elaine visit in Berkeley, filled with bored mammals gazing into the middle-distance like Ben drifting on a raft in his parents’ pool. Featuring one of the great pop soundtracks of all time, by Simon & Garfunkel, THE GRADUATE is an ecstatically inventive portrait of the miserable rich, on par with anything produced by 1960s European Art Cinema: Michelangelo Antonioni with jokes.” – MZS

Screening with the Oscar-winning animated short THE DOT AND THE LINE  (1965, directed by Chuck Jones & co-directed by Maurice Noble), billed as “a romance in lower mathematics.”