Based upon Ann Beattie’s debut novel, Silver’s wistful comedy follows lovelorn civil servant Charles (John Heard) pining after his ex Laura (Mary Beth Hurt) a year after she ended their affair and returned to her husband. As Charles retraces the history of their doomed relationship (via flashbacks and direct-camera address) and becomes increasingly obsessed, he must also contend with a skirt-chasing roommate (Peter Riegert) and his unbalanced mother (onetime femme fatale par excellence Gloria Grahame, in one of her final screen performances).

Originally released as Head Over Heels in 1979, this wintry portrait of l’amour fou showcases a sardonic humor and melancholic undercurrent not commonly seen in a studio romantic comedy. The film underperformed at the box office, but United Artists, eager to capitalize on Beattie’s increasing literary fame, rereleased it in 1982 under the novel’s title with a new ending more fitting of the film’s tone. CHILLY SCENES fared better financially the second time around and became something of a cult favorite, but it’s barely been released on home video and unjustly ignored ever since.

35 years after its first release, we hope to correct that with this rare 35mm revival and special reunion with the filmmakers. With its rich cast (including producers Griffin Dunne and Mark Metcalf in small roles), delicious dialogue and complex characters – all hallmarks of Silver’s work – CHILLY SCENES OF WINTER deserves to claim a place as one of the great sleepers of the vaunted ’70s American cinema, the crucial missing link between Woody Allen’s Annie Hall and Albert Brooks’s Modern Romance.

CHILLY SCENES OF WINTER at the St. Marks Cinema in 1982: 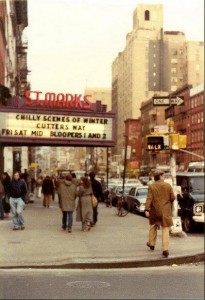