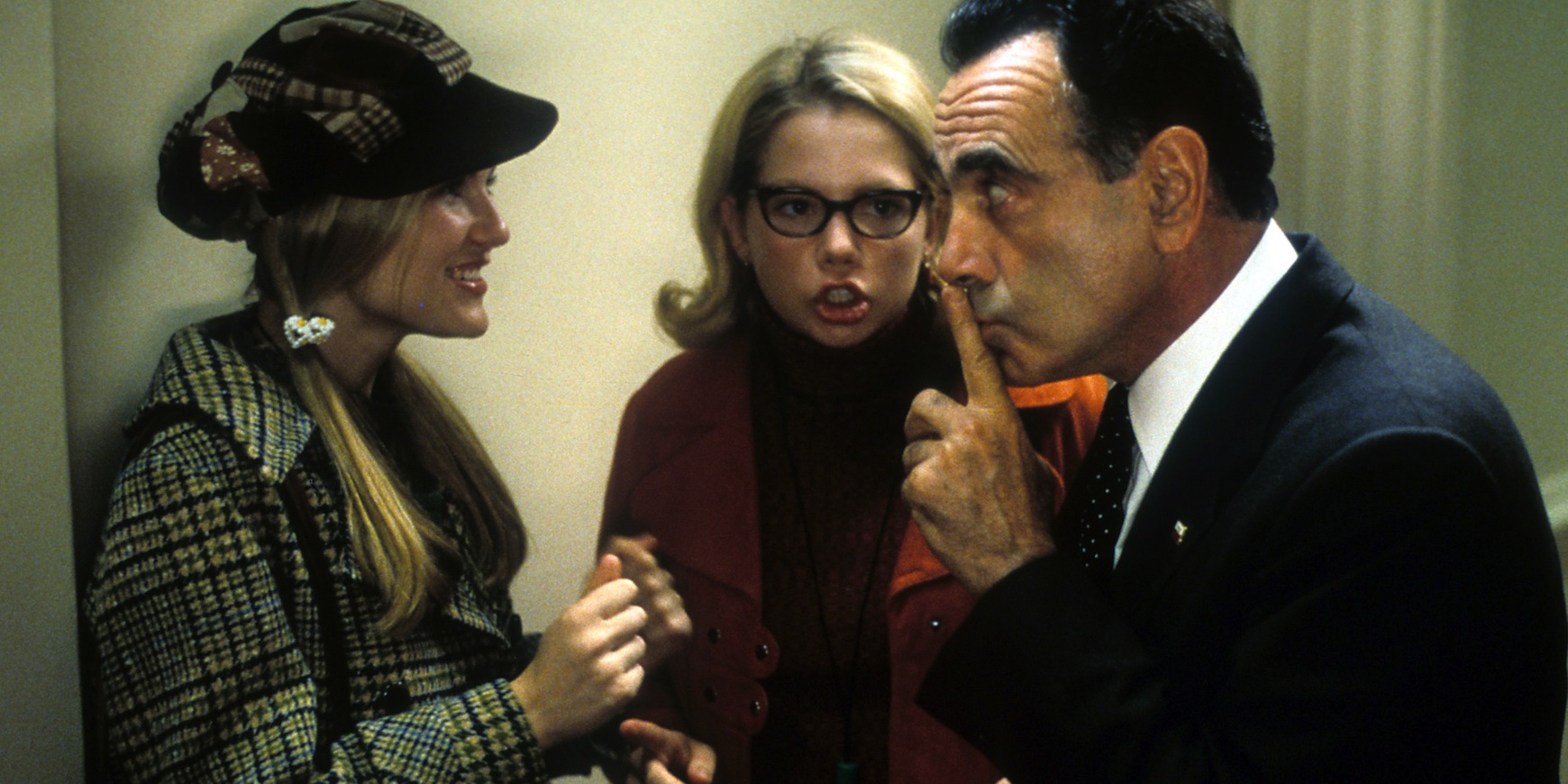 “GRADE A. Richard Milhous Nixon’s prickly nickname was always much too easy a punchline — and a quarter century of White House foibles following the infamous resignation of the 37th President of the United States has not sharpened the joke. But crude Dick jokes are the only dull moments in DICK, a gaily funny, shrewdly inventive satire that solves all the niggling mysteries of the Byzantine national nightmare known as Watergate with a blithely ’90s affection for ’70s What were we thinking? popular and political culture.

“DICK traces Nixon’s downfall to the pep-squad exuberance of two shiny, happy, clueless girls, Betsy (Kirsten Dunst) and Arlene (Michelle Williams). And that’s some fabulous casting right there, as two pulchritudinous youthquake actresses tear into their roles with screwball verve. (Dunst, at 17 — 17! — plays her age with the understanding of someone twice that.) The seamless inevitability of this well-constructed farce has innocent Betsy and Arlene unknowingly crossing paths with the Watergate burglars mid-burgle; puts the girls, on a White House class trip, face-to-face with Nixon (Dan Hedaya, hereafter Tricky Dick for Life if he wants the job), who appoints them official dog walkers; and deposits them in the Oval Office, where they blithely uncover a tape recorder left momentarily unguarded by presidential secretary Rose Mary Woods (SNL‘s Ana Gasteyer), into which Arlene, nursing a crush on the Commander-in-Chief, sings an Olivia Newton-John love song …

“Twist follows nutty twist — and never more gleefully than when the girls tangle with Washington Post reporters Bob Woodward (Will Ferrell) and Carl Bernstein (Bruce McCulloch). Any residual luster left on the famous journalists so many years after All the President’s Men is casually scrubbed off in a definitive bit of historical revisionism as the two (”muckraking bastards” Nixon calls them) are indelibly portrayed as vain, obnoxious wonks whose luck really turned when they met Betsy and Arlene, unnamed sources. (History students will recall that the identity of the Watergate informant known as Deep Throat has never been revealed.)

“Indeed, under the sure, unforced direction of Andrew Fleming (The Craft), DICK combines the comic resources of Saturday Night Live and Kids in the Hall alumni with far greater success than usually results from such alchemy: That’s Dave Foley as H.R. ”Bob” Haldeman, Harry Shearer (the Jedi Master of satire) as G. Gordon Liddy, Jim Breuer as John Dean. These are comedians for whom political skewering is a calling, not just a chance to wear funny wigs, and associating with actresses born post-resignation appears to inspire them.

“That a whole generation of moviegoers has grown up oblivious to the disgrace of Richard Nixon makes this odd gem all the more precious: Like Election and Rushmore, it’s a ‘teen’ comedy that isn’t a teen comedy at all, but cops groovy teen spirit in the service of something much more adult. As they used to say in the ’70s, DICK dares to do its own thing. As we say in the ’90s, it’s about something.” –Entertainment Weekly