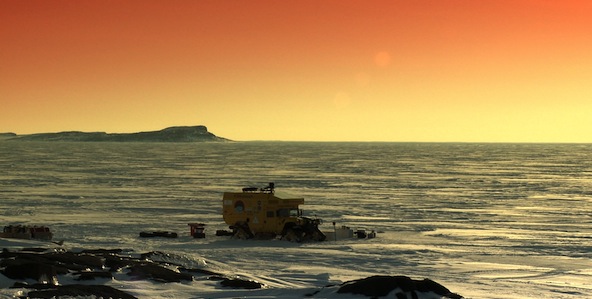 PASSAGE TO MARS is the journals from the true Arctic expedition to prepare the first human exploration on Mars.  A crew of six aboard NASA experimental vehicle HMP Okarian attempts to cross 2,000 miles of Arctic sea-ice to reach NASA outpost on the remote island of Devon, a place where humans prepare for Mars.  This unprecedented adventure, planned to last a few weeks, becomes a three-year epic odyssey of hope, fear and survival.  Shot on the breathtaking sea ice on Earth, and on Mars as captured by robots, this true story is a vibrant, thought-provoking hymn to our thirst for discovery.

"Take ICE ROAD TRUCKERS, mix it with THE MARTIAN and blend in a book of verse, and you’ve got something that resembles PASSAGE TO MARS, a beguiling documentary that’s concerned as much with images as it is with information."