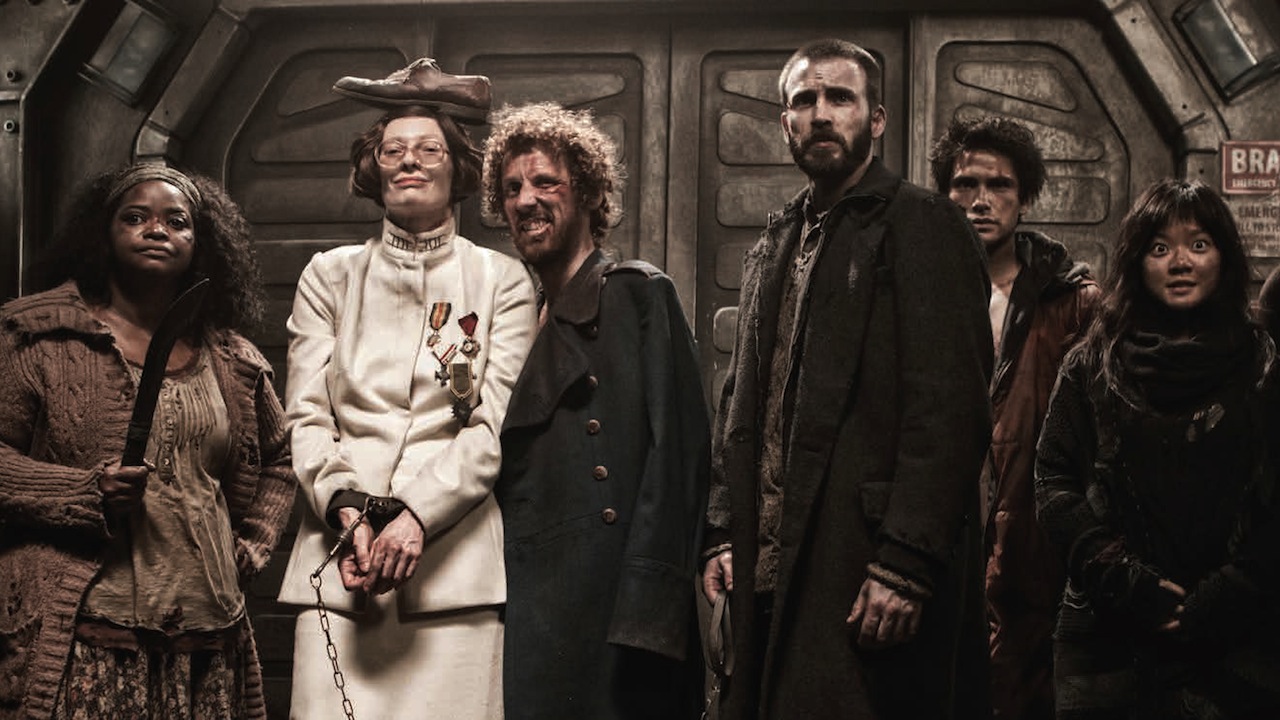 “In the mood for allegory? Have a look at Bong Joon-ho’s SNOWPIERCER, which proceeds from a fantastical premise rich with real-world relevance. After a human-engineered planetary catastrophe (trying to arrest the planet’s warming, we accidentally froze it solid), the remaining people are stuck on a train that never stops moving. A few thousand survivors live in railway cars, sorted into a rigid and ruthlessly enforced social order. In the back are huddled masses fed on gelatinous, insect-based black protein bars and kept in line by a combination of propaganda and brute force. Toward the front, the more fortunate enjoy access to schools, nightclubs, fresh food and the reassurance that they deserve everything they have. An unseen, quasi-mythical entrepreneur is in charge, and a group of rebels have decided to challenge his power and the extreme inequality he represents.

“But perhaps […] you’d prefer an action movie. SNOWPIERCER, based on the graphic novel ‘Le Transperceneige’ by Jacques Lob, Benjamin Legrand and Jean-Marc Rochette, is unusually satisfying in that regard as well. Mr. Bong, whose previous films include the brilliant psychological thriller Mother and The Host, a sublimely moving monster flick, is a playful and rigorous visual thinker. Here he stages kinetic fight scenes in narrow spaces and punctuates the noise and speed of the train with moments of eerie, poignant calm as it glides through digitally rendered ice and snow. The violence inside swerves from slapstick to bloodshed and back, producing a volatile blend of humor and horror that pays tribute to the source material while coloring its themes with the director’s distinctively perverse and humane sensibility.

“And if acting is your thing — or at least the particular pleasure of watching first-rate screen performers ham it up in a busy genre setting — SNOWPIERCER will not disappoint. The reluctant leader of the rebels, a back-of-the-train troublemaker named Curtis, is played by Chris Evans, his clean-cut Captain America charisma obscured by scruffy facial hair and a black wool watch cap. He is a stoical, heroic presence amid the chaos, which means he has less room to be interesting than the other actors, who provide some of that chaos. They include Octavia Spencer, John Hurt and Jamie Bell as some of Curtis’s fellow insurgents, whose careful planning and simmering resentments blossom into revolt after an especially cruel provocation by the authorities. There are soldiers in riot gear, armed with clubs and guns, but for Mr. Bong evil is never anonymous. He gives it a grotesque, human face — or rather a series of faces, most memorably Tilda Swinton’s, almost unrecognizable in prosthetic teeth and oversize glasses.

… Disaster has become a matter of routine at the movies (in more ways than one). Planetary destruction and human extinction happen a half-dozen times every summer. It’s rarely this refreshing, though.” –New York Times