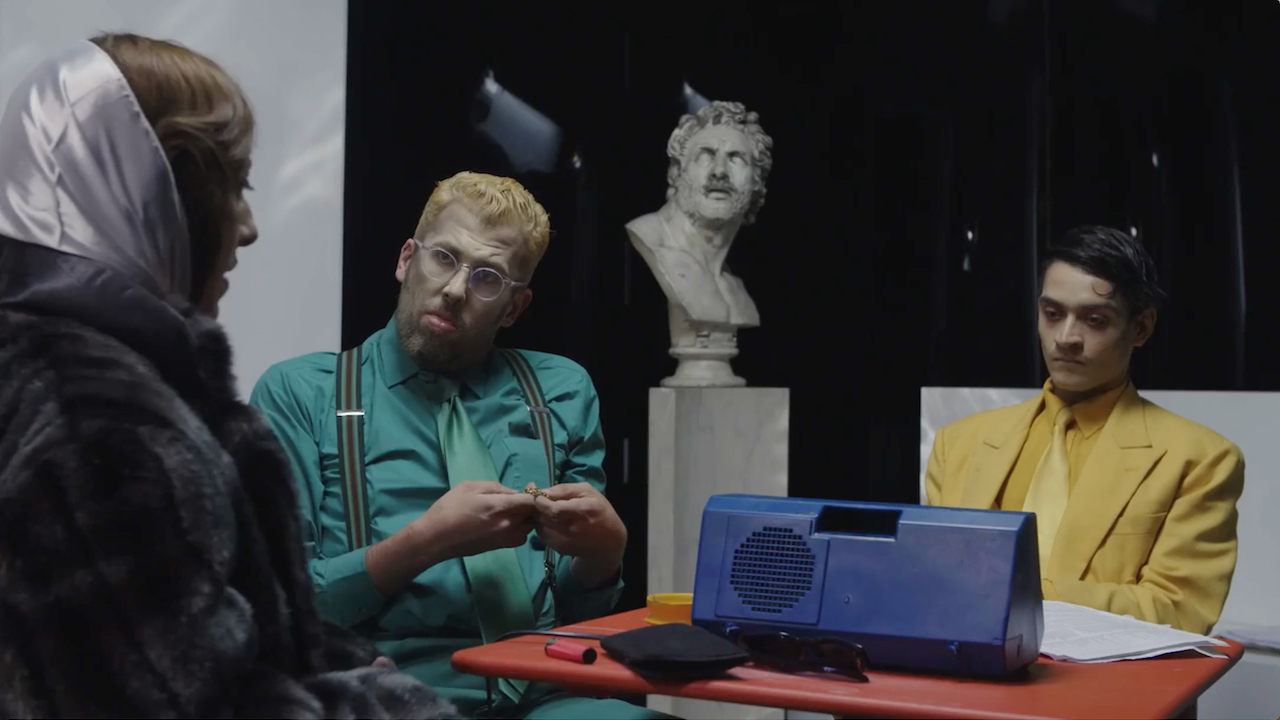 Love at the Frankfurt Autoshow

Join Art in General and artist Than Hussein Clark at NYC art house cinema IFC Center for a free screening of Clark’s feature-length film, Love at the Frankfurt Autoshow. This is the film’s first-ever screening in New York and is presented as part of Art in General’s current exhibition School of Pain which investigates economies of desireand is curated by Michal Novotný.

Love at the Frankfurt Autoshow (2017) draws on the languages of melodrama, police thriller, and film noir, detailing the machinations of a famous industrial family whose launch of a new self driving car has been has been sabotaged by a mysterious professor and his accomplice. An embodiment of the artist’s distinct aesthetic, each character is marked by their colorblocked costumes as much as their exaggerated speech and mood.

The film extends Clark’s interest in what Rainer Werner Fassbinder terms “the exploitability of feelings” and the antagonistic dynamics between theatricality and objecthood into cinematic space. In a thoughtful and expansive review of the film published in Frieze magazine, art critic Martin Hargreaves observes that “Clark’s focus is on the machinations of relationships and the economic exchange of desire, here staged through the slippery ambivalence and duplicity of self conscious theatricality and high camp.”

Than Hussein Clark (born 1981 in New Hampshire, USA, lives in London and Hamburg) works as an independent artist as well as being a member of the editorial board of the London-based Montez Press, co-established by the artist in 2012, which publishes texts “against current critical modalities and theoretical dogmas which inform the workings of contemporary knowledge economy.” After studying acting in New York and Los Angeles, he first completed a degree in art history in Edinburgh and London, after which he studied art at Goldsmiths College in London and University of Fine Arts in Hamburg. He is represented by Mathew Gallery in New York, VI, VII in Oslo, Galerie Karin Guenther in Hamburg and Galerie Crèvecoeur in Paris.

General Support of Art in General is provided by The Andy Warhol Foundation for the Visual Arts; New York State Council on the Arts with support of Governor Andrew Cuomo and the New York State Legislature; National Endowment for the Arts; Greenwich Collection, Ltd.; Cowles Charitable Trust; The Rockefeller Philanthropy Advisors; and by individuals. This program is also supported, in part, by public funds from the New York City Department of Cultural Affairs in partnership with the City Council.

The International Collaborations Program is supported by the Trust for Mutual Understanding and the Milton and Sally Avery Foundation. Support is also provided by Art in General’s Commissioners’ Circle.