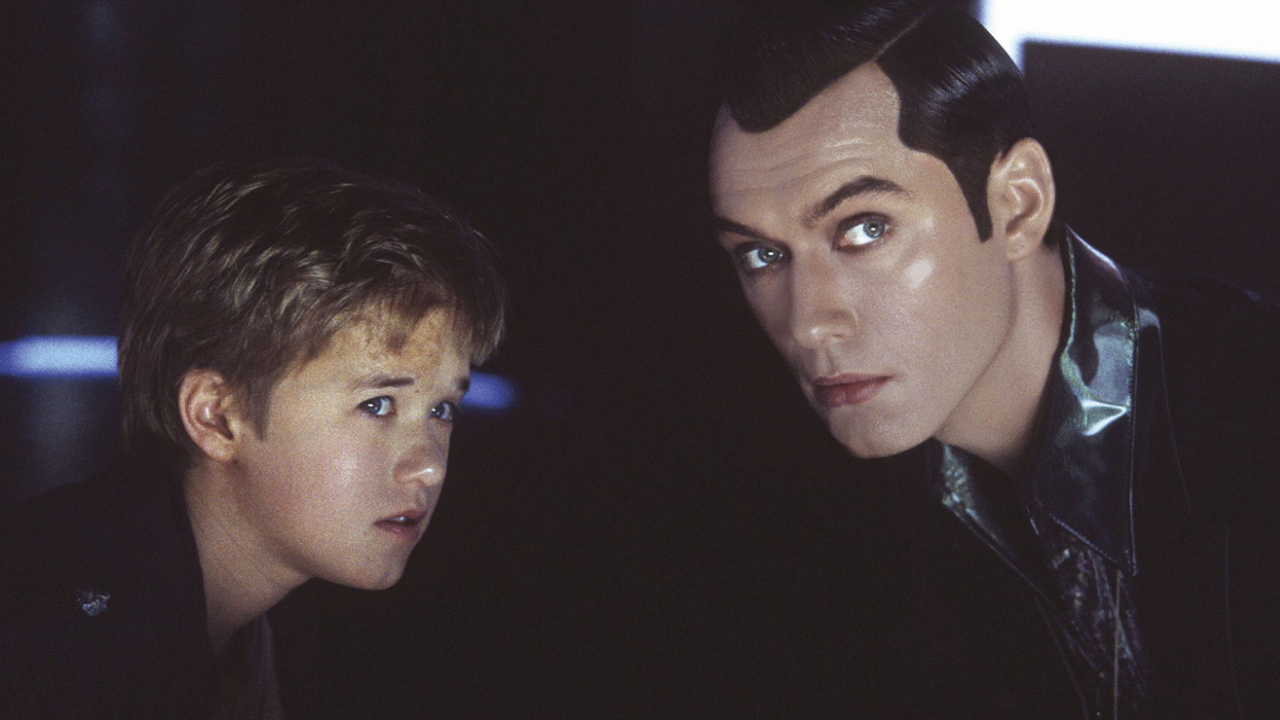 “A complex collaboration between cinema giants, writer-directors Stanley Kubrick and Steven Spielberg, A.I.: ARTIFICiAL INTELLIGENCE is one of the most thoughtful and serious science fiction films ever released by a major studio. It is also one of the most confounding. This stems mainly from the contrast between the movie’s tone of wide-eyed wonder (sustained by Spielberg, score composer John Williams, and cinematographer Janusz Kaminski, who halos the performers in heavenly light) and the bleak presentation of humankind as a species that sees itself as benevolent but capable of cruelty that is all the more shocking for being so blithe.

The main character is David (Haley Joel Osment of The Sixth Sense), an android boy purchased by a wealthy family whose biological son has a rare disease and is being kept in suspended animation in a medical facility. David’s presence is meant to fill an emotional gap, but when the family’s blood son miraculously recovers and returns home, it creates a sibling rivalry that can only be resolved by removing David. This sets up the first of the film’s many heartbreaking and horrifying moments: David’s removal from the household by his “mother” (Frances O’Connor), which is no less primally disturbing for being a physically nonviolent act committed by a woman who hates herself for doing it.

A.I.: ARTIFICiAL INTELLIGENCE then becomes a picaresque journey through a world that we didn’t even know was dystopian until the hero was ejected from the bubble of upper-class life. Wandering the wilderness, the helpless and naive artificial boy encounters other robots of various types, including a sex droid named Gigolo Joe (played with glittery-eyed relish by Jude Law), and is briefly imprisoned at a “Flesh Fair,” where humans revel in what is essentially a series of lynchings of non-human persons that they have decided have no souls. Throughout, Spielberg serves up a series of spectacular and often haunting vistas, including a vacant and iced-over Manhattan, before moving into a final stretch that is still controversial, even despised in some quarters, for its seeming sentimentality, even though it should be obvious from the actions and statements of the characters that we’re meant to sense deep ironies that are at odds with the fairy-tale presentation, and wrestle with them.

The movie’s tricky philosophical and emotional valences are rooted in its complex production history. Adapted from a novel by Brian Aldiss, David’s story was transformed by Kubrick and writer Ian Watson into a darkly ironic answer to Pinnocchio, complete with a Gepetto-like inventor played by William Hurt and a perhaps-apocryphal Blue Fairy that David seeks out, hoping she will make him into a real boy. The material was transformed again after Kubrick’s death by Spielberg. who was personally selected as director by Kubrick, and felt such deep affinity for the story that it inspired him to take his first screenwriting credit since Close Encounters of the Third Kind almost a quarter-century earlier. Spielberg’s involvement alienated Kubrick fans who associated Spielberg with sentimentality but failed to see the many areas of overlap between the directors, including their willingness to show evil manifested as institutionalized indifference to suffering and collective responsibility, not just lip-smacking sadism (although this film features both types). Like so many great science fiction movies about artificial intelligence, A.I is ultimately about what it means to be human. Its conclusions are not reassuring.” — Matt Zoller Seitz

Followed by a conversation with Matt Zoller Seitz and critic and author Walter Chaw (also hosting a screening and book signing of his book Miracle Mile the following night, on September 22).