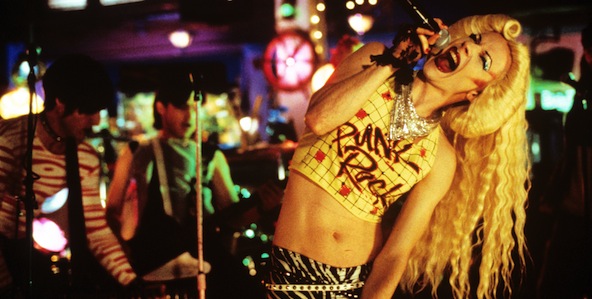 Hedwig and the Angry Inch

John Cameron Mitchell’s (Shortbus, How to Talk to Girls at Parties) gender-bending rock musical directorial debut, returns to the big screen in a gorgeous new 4K restoration, playing for a one-week exclusive engagement July 11-17 at IFC Center, with Mitchell appearing in person at the 7:30 screening opening night.

Writer-director-star Mitchell won the Best Director and Audience Awards at Sundance and was nominated for a Golden Globe for Best Actor for this cinematic adaptation of his and composer-lyricist Stephen Trask’s off-Broadway hit. From the project’s early iterations as a revue at the legendary downtown rock n’ roll drag party Squeezebox, this trailblazing musical has always been as unclassifiable as its protagonist.

Raised a boy in East Berlin, Hedwig (Mitchell) undergoes a traumatic personal transformation in order to emigrate to the U.S., where she reinvents herself as an “internationally ignored” but divinely talented rock diva, characterized by Mitchell as inhabiting a “beautiful gender of one.” The film tells Hedwig’s story through her music, an eclectic assortment of original punk anthems and power ballads by Trask, matching them with a freewheeling cinematic mosaic of music-video fantasies, animated interludes, and moments of bracing emotional realism. A hard-charging song cycle and a tender character study, HEDWIG AND THE ANGRY INCH is a tribute to the transcendent power of rock n’ roll.

John Cameron Mitchell’s 2014 Broadway production of Hedwig garnered him Tony Awards for his performance and for Best Revival of Musical. His film credits as a director include the sexually frank ensemble film Shortbus (2006), and an adaptation of the Pulitzer Prize-winning play Rabbit Hole (2010) which garnered an Oscar nomination for Nicole Kidman.  Recent recurring TV roles include HBO’s Girls, HBO’s Vinyl, CBS’s The Good Fight, Amazon’s Mozart in the Jungle and Hulu’sShrill. His film adaptation of Neil Gaiman’s punk-era How to Talk to Girls at Parties starring Elle Fanning, Alex Sharp and Nicole Kidman was released in 2018. His recent projects include the musical Anthem, starring himself and co-authored with composer Bryan Weller, which was released as a long-format narrative podcast series.