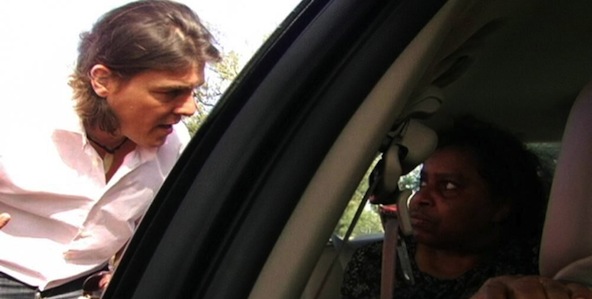 I’m Carolyn Parker: the Good, the Mad, and the Beautiful

STF’s Fall Season is dedicated to a retrospective of Jonathan Demme’s documentaries. Demme will present his film set in New Orleans. Demme talked about the film on Pure Nonfiction episode 6.

Carolyn Parker is a proud resident of New Orleans’ Lower Ninth Ward. Despite living on modest means, Parker — a retired hotel chef with disabilities — makes the most of what she has, combining a bold sense of humour with a fierce activism and a pervasive spirituality. In the wake of Hurricane Katrina, she was among the first residents to return and fight for her neighbourhood’s survival. Kyrah Julian, Carolyn’s teenage daughter, abandoned a full scholarship at Syracuse University to join her mother’s efforts; her son Rahsaan came home from California to help save the family home. A few months after the flood waters receded, filmmaker Jonathan Demme met Parker outside her damaged home while he was interviewing locals. From their casual introduction grew this poignant document, filmed over five years of one family’s struggle to rebuild from devastation.

Demme takes a personal approach, conducting conversations from behind the camera. When we first meet Parker, her house is in shambles — requiring new walls, electricity, windows, and more — yet she can’t fathom moving anywhere else. Her church suffered similar damage, raising debate as to whether the Catholic diocese will reinvest in the black community or divert resources to a predominantly white parish. Over the next several years, Parker’s unflagging efforts to save her home and church come across as alternately good, mad and beautiful.

Until Hurricane Katrina, most outsiders had never heard of the Lower Ninth Ward. Television news crews saturated us with images of desperate victims, then they moved on. Demme’s film is a remedy to this disasterdriven coverage. In true Louisiana fashion, he doesn’t rush. He takes pleasure in Parker’s company, whether she’s reminiscing about her early days in the civil rights struggle or just cooking dinner. The longevity of filming pays off with precious moments and large transformations. Indeed, Demme spent so much time with Parker’s family that he wound up casting roles for her daughter Kyrah and visiting Pastor Melvin Jones in Rachel Getting Married. Now it’s Carolyn Parker’s turn to shine on the big screen.