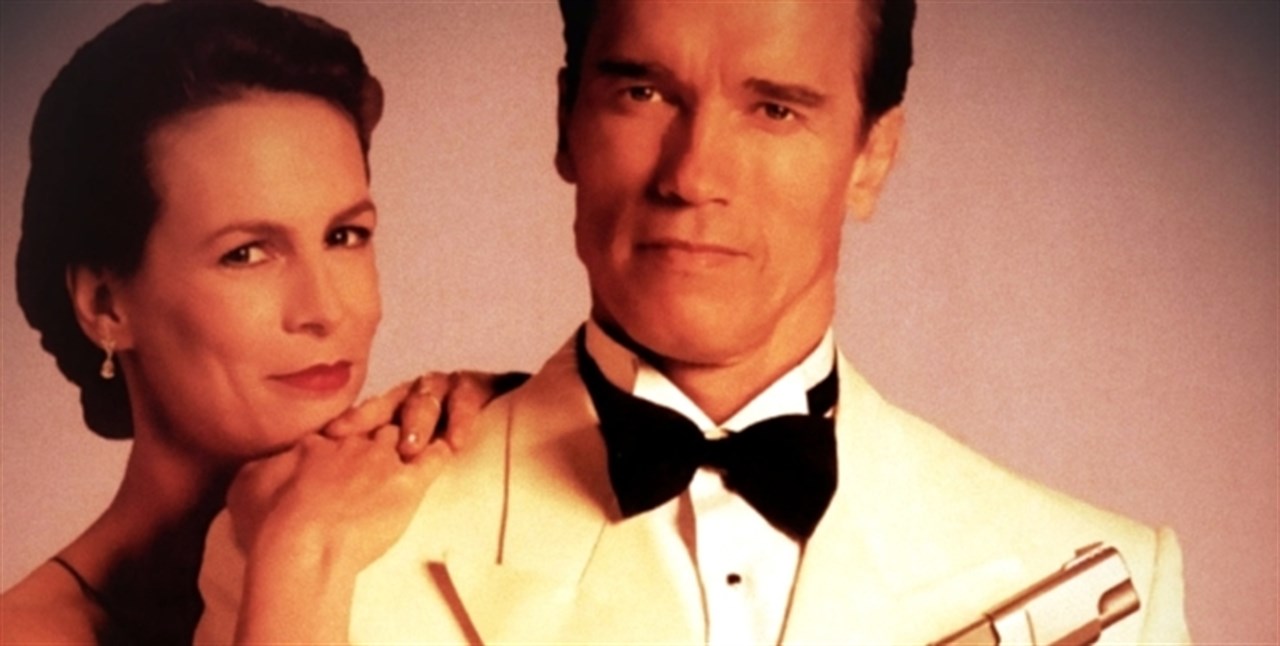 Regrettably, the Jan 3-4 screenings of TRUE LIES are canceled, as the 35mm print that we received is missing an entire reel (roughly 20 minutes). The studio does not have another print they can provide, and the film is not available digitally. We apologize for the inconvenience.

“Helen (Jamie Lee Curtis) doesn’t realize that her snooze of a husband, Harry (Mr. Schwarzenegger), is a globe-saving spy. But that’s just the start of the story. Like Sandra Bullock, who drives the bus in Speed, in the course of TRUE LIES Ms. Curtis changes from a mouse to an action hero. Her change is witty and liberating, and a turning point in a film that might be a comic-action version of Scenes From a Marriage…

“Much of the appeal of TRUE LIES comes from the smooth grafting of battle-of-the-sexes comedy onto a high-tech action picture. The movie’s advertising art includes a clever, apt image: a hand grenade with an engagement ring as its pin. James Cameron, the film’s writer and director, blows up plenty of bridges, trucks and jets here. Along the way he explodes sexual stereotypes too.

“Mr. Cameron is the master of movies that put women at the center of the action. He is responsible for the macho Sigourney Weaver in Aliens and the pumped-up, rifle-toting Linda Hamilton in Terminator 2: Judgment Day. Expanding women’s roles in action movies like these, and to a lesser degree in Jan De Bont’s Speed, has little to do with charting social change (as if these movies cared). It is simply a smart commercial move. Traditionally, action films have been directed at male viewers; adding a character with whom women can identify broadens the audience appeal. But pop culture always reflects mainstream attitudes, if only inadvertently, and in their exaggerated ways these films hint at how women’s lives have changed.

“The heroines of ALIENS and Terminator 2, however, developed their biceps between movies, in the time lapse between the original films and the sequels. By showing Helen’s transformation in TRUE LIES, Mr. Cameron charts the comic course of a female stereotype falling to pieces.” – The New York Times