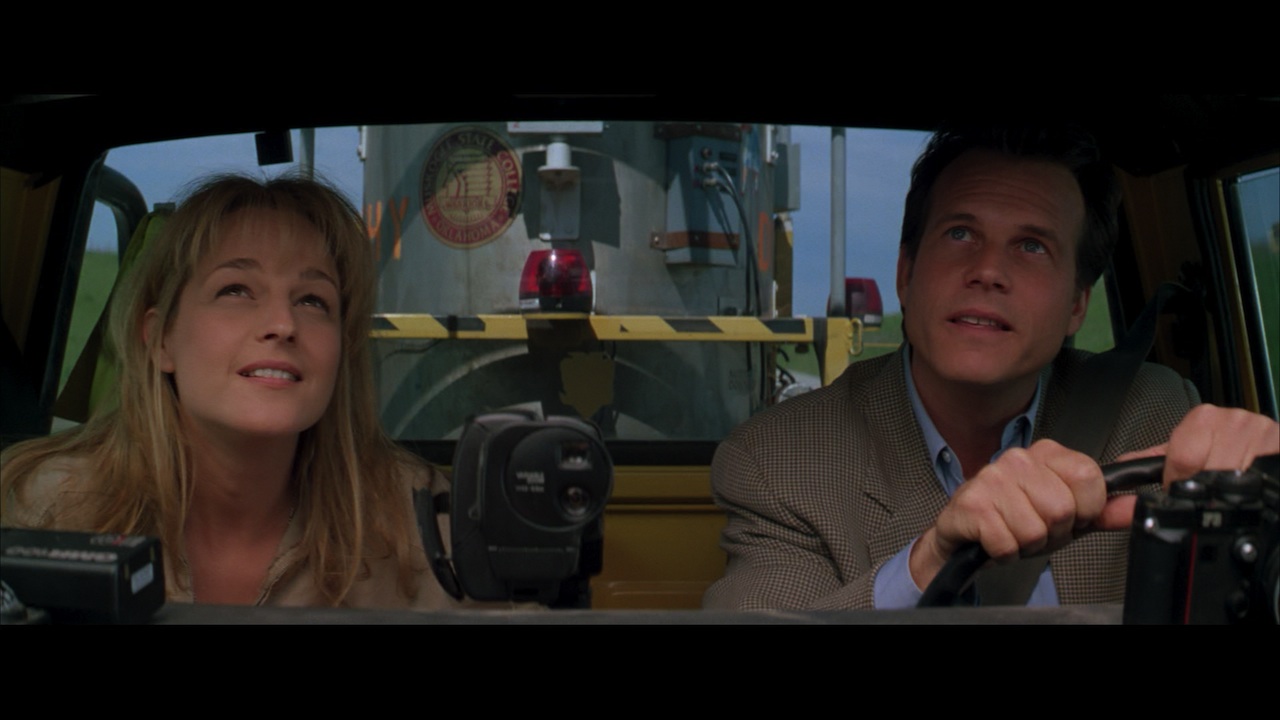 “In a word, wow. The first of the 1996 summer blockbusters finally arrives… and – surprise! – it’s a keeper, a tumultuous love story set against the backdrop of 24 hours of really, really inclement weather in the Oklahoma heartland. [Bill] Paxton is Bill Harding, a daredevil storm chaser who’s hung up his foul weather gear in favor of a more stable job as a television weatherman. Along with his new fiancée Melissa (Gertz), a marriage therapist, he arrives in the company of his former comrades-in-rain one day to finalize his divorce papers with ex-wife Jo Harding (Helen Hunt). Before he can get her all-important signature on the proper forms, however, he finds himself sucked back into his former life as the largest storm system in the last 12 years mounts on the horizon and a series of increasingly deadly tornadoes begins to touch down around them. Paxton, whose idea for a unique storm-tracking device is about to undergo its maiden voyage by his old crew, can’t help but go along for the ride, and before the day is through, he’ll have to re-evaluate his recent marital decisions and avoid having his skull crushed by plenty of airborne cows, farm implements, and whatnot.

“…Produced by the same folks who brought us Jurassic Park, Twister has much of the same white-knuckle, edge-of-the-seat feel to it. Paxton and Hunt (both terrific) are the tornadic equivalent of that film’s Sam Neill and Laura Dern, with the brazen, cocksure Hunt even occasionally costumed and lit similarly to Dern. With Speed’s De Bont helming the director’s chair, however, Twister moves at twice the rate, slowing down only for necessary exposition and an odd little subplot involving Elwes’ rival team of storm trackers that never seems to go anywhere. And while Paxton and Hunt do indeed manage to generate some real electricity (Hunt’s manic role as the thoroughly obsessed Jo is disturbingly realistic), the real stars of this huge movie are the twisters themselves, courtesy of George Lucas’ ever-brilliant Industrial Light & Magic. Tremendously convincing, these computer-generated tornadoes are as terrifying screen monsters as I’ve seen since, well, since Jurassic Park. The audio technology used in creating their deadly roar is certainly a shoo-in for an Oscar, as well. I’ve never heard a louder, more aurally nightmarish movie in my life (and I highly suggest you make every effort to catch Twister in a theatre equipped with Dolby Digital Stereo Sound – that’s half the fun), bristling as it does with a titanic wall of unnatural, bizarre tornadic tones. And I’m not even going to get into all the amazing stunts that litter the film like so many bad hairpieces at a TV weatherman convention – suffice to say, anything that could conceivably be sucked upwards by a tornado, is. A summer juggernaut of a film in all the right ways, Twister is one of those movies that leaves you gasping for breath, incredulous and exhilarated all at once. Sort of like Winnie the Pooh’s Blustery Day meets Mr. Toad’s Wild Ride with Dorothy’s house spiraling just above. Only louder.” –Austin Chroncle