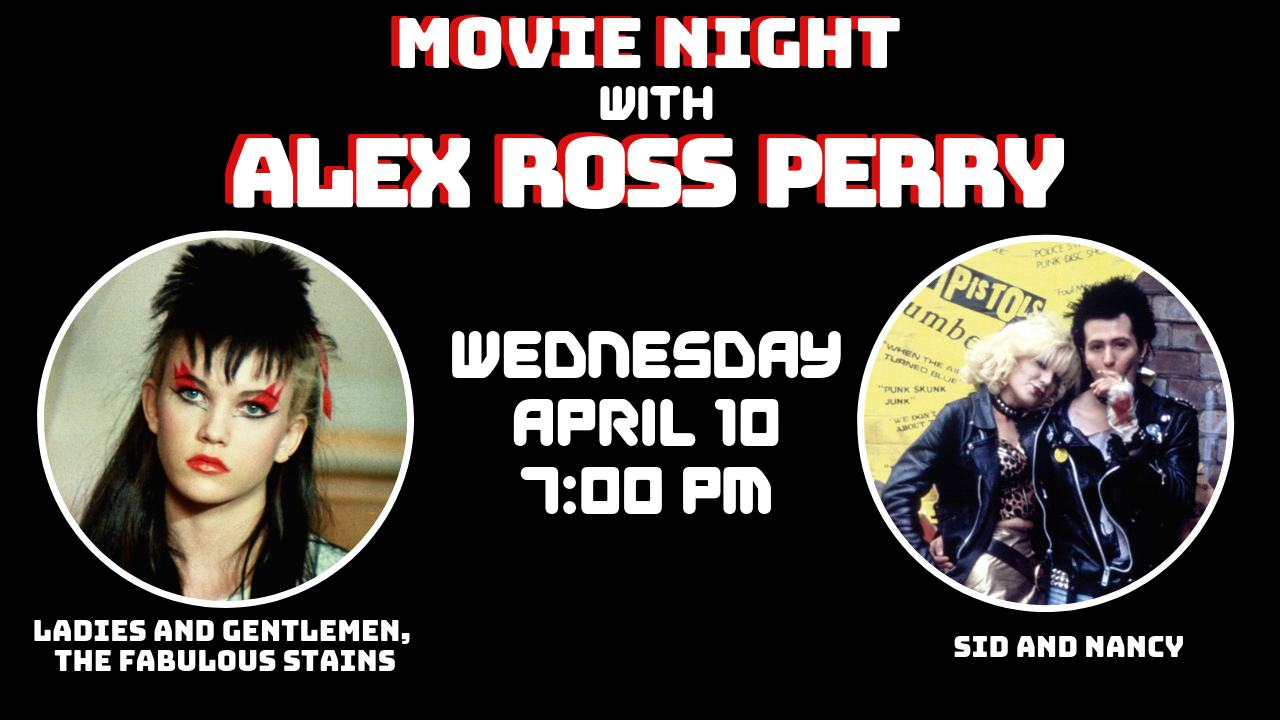 IFC Center is proud to present “Movie Night with Alex Ross Perry: LADIES AND GENTLEMEN, THE FABULOUS STAINS and SID AND NANCY,” a special double-feature event with the acclaimed writer-director-producer in person to screen and discuss two of his punk favorites on Wednesday, April 10 at 7:00pm.

The evening begins with Lou Adler’s 1982 tale of a confrontational teenager’s (Diane Lane) rise to punk stardom, screening on a rare 35mm print, followed by Alex Cox’s 1986 portrait of the corrosive relationship of The Sex Pistols bassist Sid Vicious (Gary Oldman) and his girlfriend Nancy Spungen (Chloe Webb). Both films were influences on Perry’s latest, the New York and Toronto International Film Festival hit HER SMELL, opening April 12, with Elisabeth Moss as a self-destructive singer trying to get her life—and her punk band—back on track.

“There is not and has never been a vast amount of (non-documentary) punk movies,” notes Perry. “I suspect that the intersection of people who love punk enough to want to make a movie about it and the people in a position to make a complex and costly music-based film is probably very, very slim. But there are a handful of great punk films that shaped both my young musical tastes as well as the aesthetics and design of HER SMELL. SID AND NANCY was the first major punk movie that I saw. It is beyond endearing to realize there was a Sid Vicious movie over three decades before there was a Queen movie. LADIES AND GENTLEMEN, THE FABULOUS STAINS is timeless and fascinating in the way it depicts the rise and struggles of a fictional punk band as though it is a straightforward biopic. The accessibility of these titles has ranged from ‘out-of-print Criterion’ to ‘bootleg only-turned-out-of-print DVD’ and thus, I really feel neither has ever become as canonical as they always have been to me. Paul Cook and Steve Jones of the Sex Pistols, fictionally depicted in SID AND NANCY, even appear in STAINS and wrote some of the film’s songs.”

ALEX ROSS PERRY was born in Bryn Mawr, Pennsylvania in 1984. He attended the Tisch School of the Arts at New York University and worked at Kim’s Video in Manhattan. He is the director of the films Impolex, The Color Wheel, Listen Up Philip, Queen of Earth and Golden Exits and the writer of Disney’s Christopher Robin. He lives in Brooklyn, New York.

Special IFC Center Member pricing for $5 a ticket to see both films!