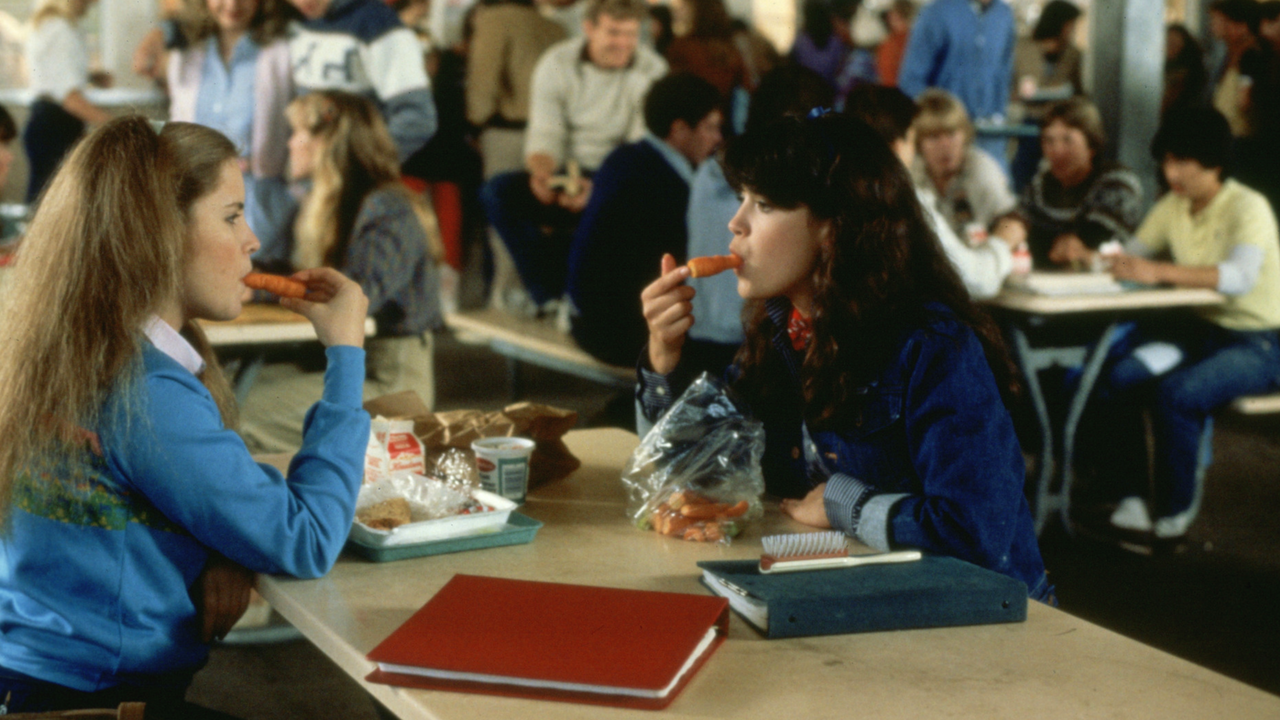 “FAST TIMES AT RIDGEMONT HIGH begins not at high school but at a shopping mall. That’s where most of the kids spend their time, and an amazing number of them seem to work in fast-food restaurants. There is Brad (Judge Reinhold), who declares, ‘I shall serve no fries before their time.’ There’s Brad’s sister, Stacy (Jennifer Jason Leigh), who complains petulantly to her friend and co-waitress, Linda (Phoebe Cates), ‘You’re the one who told me I was gonna get a boyfriend at the mall.’ There’s Mark (Brian Backer), who pines for Stacy from afar or at least from the movie theater across the way, where he works as an usher. And there’s Mark’s friend Mike Damone (Robert Romanus), who gives Mark lots of free advice about how to handle women. To demonstrate some of this, Mr. Damone stops at the mall’s record store and tries out some of his best lines on a lifesize cardboard cutout of Debbie Harry. He particularly stresses the aphrodisiac qualities of ‘Led Zeppelin IV.’

“All these young actors are relaxed, funny and natural. But the movie’s real scene stealer is Sean Penn, as a pink-eyed surfer named Jeff Spicoli who wouldn’t dream of holding down a job. Spicoli’s dream is to describe surfing to a television interviewer as ‘a way of looking at that wave and saying ‘”Hey, Bud, let’s party.”‘ Spicoli thinks nothing of ordering a pizza delivered to his history classroom, though his teacher, Mr. Hand, doesn’t take it that easily. Mr. Hand (Ray Walston) is so bothered by Spicoli’s truancy that he sends other students out to catch him in the hallways. ‘You’re wrong,’ yells Spicoli confusedly after he’s been lured into the classroom on one such occasion. ‘There’s no birthday party for me in here!'”

“When the movie captures the awful sound of a high school band imitating the Eagles at a prom or the spectacle of two fast-food workers discussing their companies’ secret sauces (one is ketchup plus mayonnaise, the other is Russian dressing), it’s onto something that is both amusing and real.” – The New York Times