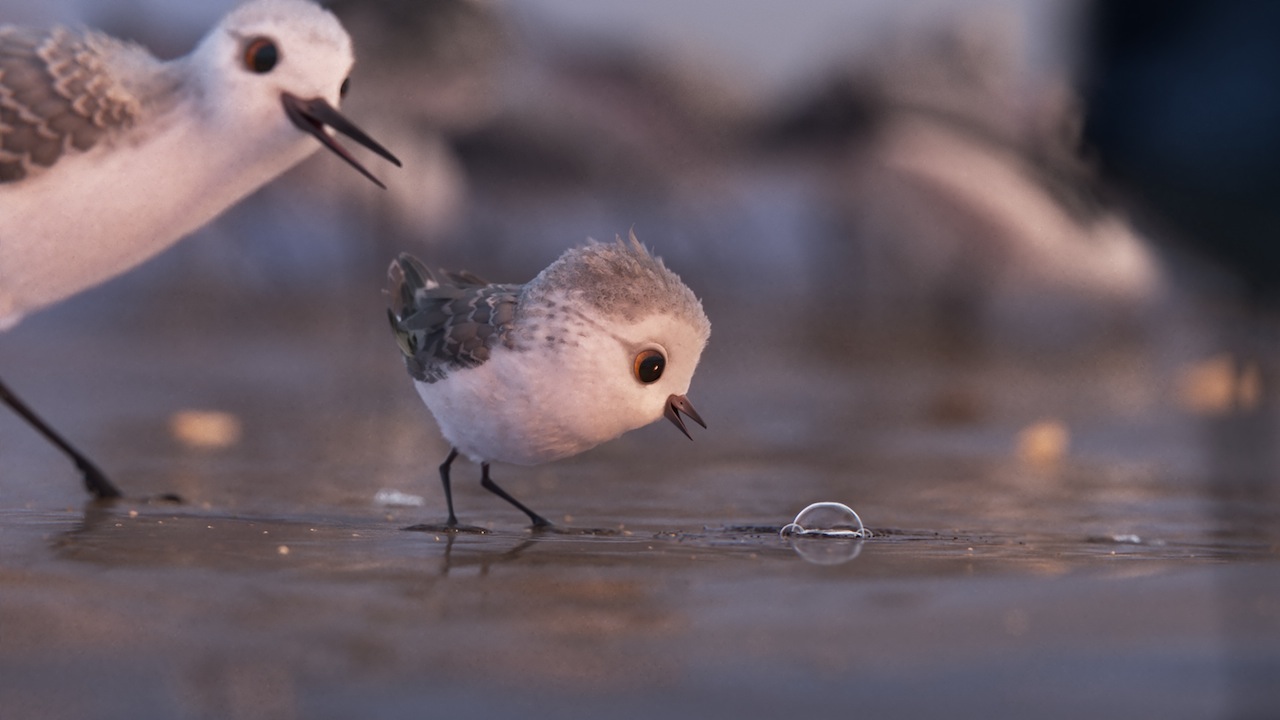 Borrowed Time – dirs. Andrew Coats and Lou Hamou-Lhadj, USA, 7 minutes
A weathered sheriff returns to the remains of an accident he has spent a lifetime trying to forget. With each step forward, the memories come flooding back. Faced with his mistake once again, he must find the strength to carry on.

Pearl – dir. Patrick Osborne, USA, 6 minutes
Set inside their home, a beloved hatchback, PEARL follows a girl and her dad as they crisscross the country chasing their dreams. It’s a story about the gifts we hand down and their power to carry love, and finding grace in the unlikeliest of places.

Piper – dir. Alan Barillaro, USA, 6 minutes
Directed by Alan Barillaro and produced by Marc Sondheimer, PIPER, the new short from Pixar Animation Studios, tells the story of a hungry sandpiper hatchling who ventures from her nest for the first time to dig for food by the shoreline. The only problem is, the food is buried beneath the sand where scary waves roll up onto the shore.

Blind Vaysha – dir. Theodore Ushev, Canada, 8 minutes
Vaysha is not like other young girls; she was born with one green eye and one brown eye. But her odd eyes aren’t the only thing that’s special about her gaze. Her left eye sees only the past. Her right, only the future. Like a terrible curse, Vaysha’s split vision prevents her from living in the present. Blinded by what was and tormented by what will be, she remains trapped between two irreconcilable temporalities.

Pear Cider and Cigarettes – dir. Robert Valley, Canada and UK, 35 minutes
Drink and smoke…that’s what Techno Stypes really liked to do. And fight. He was in no condition to fight. He was sick, really sick. His disease had whittled him down to a shadow of his former self. He was crippled from a car accident when he was 17 but that’s not how he lost his big toe. He lost that in a motorbike accident. Yeah, he was broken alright… what the hell was he fighting for anyway and what was he still doing in China? His father had given me two clear instructions: 1. Get Techno to stop drinking long enough to receive the liver transplant, and 2. Get him back home to Vancouver. This was not going to be easy.

Once Upon a Line (additional film) – 7 minutes

Please note: This program is suitable for children 8+ with the exception of PEAR CIDER AND CIGARETTES, which will be shown last in the program, and will be preceded by an onscreen note warning viewers about its content, so that families with children may exit at that time if they wish.