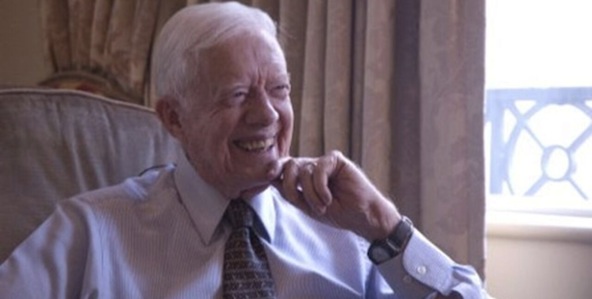 STF’s Fall Season is dedicated to a retrospective of Jonathan Demme’s documentaries. Demme will present his film about President Jimmy Carter. Demme talked about the film on Pure Nonfiction episode 6.

Jimmy Carter jokes that he was involuntarily retired when replaced as President of the United States in 1980. But “retiring” is the last adjective to describe his activities since then – from election monitoring with the Carter Center, to building homes with Habitat for Humanity, to winning the Nobel Peace Prize, to writing twenty-one books (so far). He’s the only President who has used the White House as a resumé-builder to launch a more productive career.

You might think a man so dedicated to peace would seek his own peace and quiet at the age of eighty-two. Instead, last year, Carter dove headfirst into the most controversial topic in international politics, publishing the book Palestine: Peace Not Apartheid. In Man from Plains, we follow Carter on a vigorous tour as he confronts journalists, detractors and students while tensions peak over the book.

Chronicling a political risk taker and overachiever requires a filmmaker who shares similar traits. That match has been found in director Jonathan Demme, who’s prolific career ranges from the breakthrough AIDS drama Philadelphia, to the gripping documentary The Agronomist, about Haitian human-rights activist Jean Dominique.

In Man from Plains, Demme’s cameras take a fly-on-the-wall approach as we witness Carter in public and private. Never has such a candid portrait been filmed of such a high-profile politician. Along the way, we’re privy to his thoughts on a wide breadth of subjects including poetry, poverty, history and religion. He discusses his sixty-one-year marriage to Rosalyn and grows emotional at the memory of his outspoken mother, Lillian.

During the course of the road trip, as he’s called a liar, bigot, anti-Semite and plagiarist – mostly by people who have not read his book – Carter never stops taking questions at an indefatigable pace. We see him handle interviews from perspectives as widely divergent as Al Jazeera and Israeli TV, and hear from his harshest critics, including Harvard professor Alan Dershowitz. Whether you know a little or a lot about the Middle East and whether you instinctively agree or disagree with Carter, you shouldn’t miss the opportunity to follow this journey.