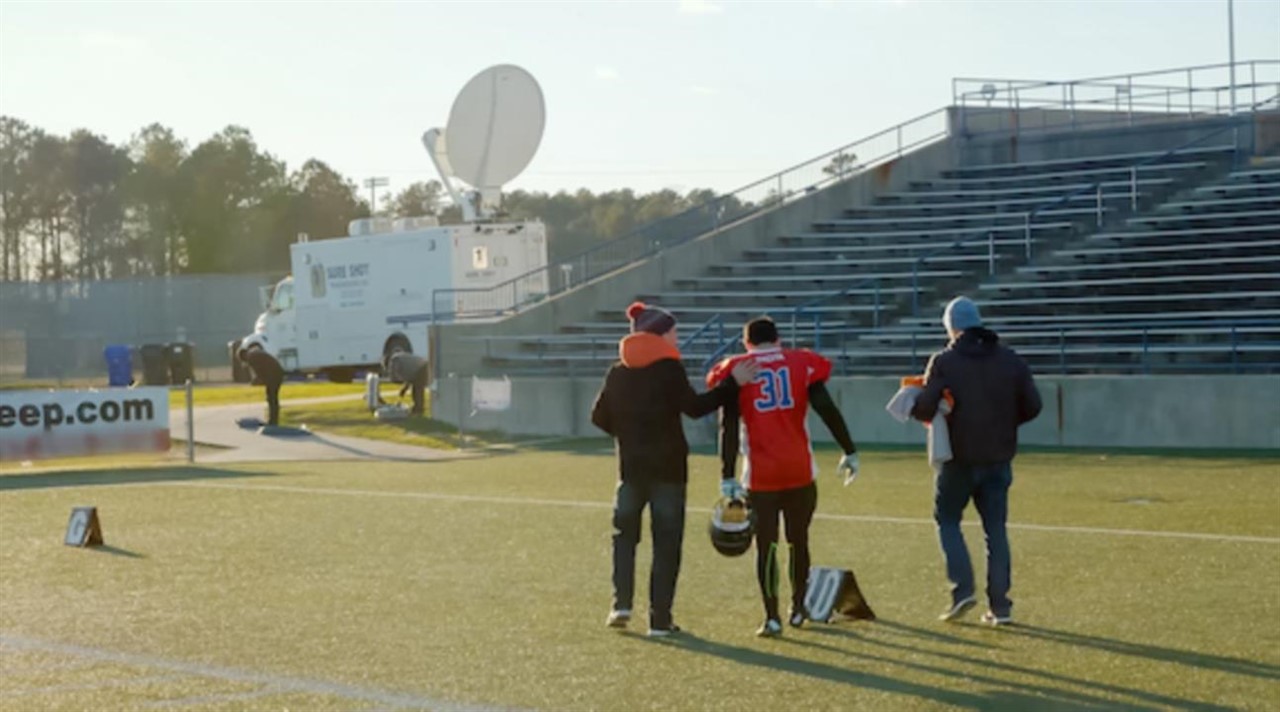 Every year billions of dollars are generated off the backs of an unpaid labor force: college athletes. Student Athlete unveils the exploitative world of high-revenue college sports through the stories of four young men at different stages in their athletic careers, a coach turned advocate, and a whistle-blowing shoe rep who exposes the money trail.

The individual stories begin with once-promising Rutgers wide receiver, Shamar Graves, 28. Despite working multiple jobs, Shamar is living out of his car, unable to make ends meet, representing the 83% of college athletes living in poverty.

Reminding us of the early potential seen in Shamar is 17-year-old Nick Richards. At 6’11”, he is a top-ranked, highly recruited basketball player originally from Jamaica. All of his high school games and tournaments are sponsored by brands, and he is required to wear their apparel on the court, yet is prohibited from accepting compensation if he wants to play college basketball, per NCAA regulations. Despite financial and familial pressure, Nick’s life is full of promise.

Since Mike Shaw was six years old, he aspired towards a singular goal: to play pro basketball. Everything seemed to be going according to plan, at 23 he was a starting forward at Bradley University and about to graduate, when the unthinkable happened: he suffered a career-ending injury. Disoriented and without a plan B, he’s unable to even consider an alternate career, having his entire identity linked to basketball. He is lost. He is forced to move back home to the South Side of Chicago, and struggles with mental stability. He represents the 98.9% of men’s college basketball players who do not make it into the NBA.

Silas Nacita, 22, was a running back at Baylor University until the NCAA banned him from playing football. He was charged with breaking NCAA rules when he accepted money from a family friend for food and a place to live. Banned from playing football in America, Silas is left with few options, and out of desperation, travels to Germany in to play in a semi-pro league. Now an outlier, he’s looking for any opportunity to show his abilities to pro recruiters. His story addresses the rigid lack of fairness in the NCAA’s regulatory system.

To provide an inside perspective on how college sports have changed from team driven to commerce driven over the past two decades, the film follows college football coach John Shoop, a 26-year veteran who ultimately loses his career due to his advocacy for student athletes. The film follows him as he rebuilds his life.

Woven throughout the film, a shoe rep reveals the extent coaches and colleges benefit financially from the labors of unpaid college athletes. He unearths the ugly truth about the billion dollar industry, describing how young men, beginning in middle school, are recruited and exploited.

Following the players over two years in a vérité style, the film leaves its audience with a clear, personal understanding of an unjust system.